Our conference ‘For Example Delft’ addressing approaches in architecture education: What to teach in the context of Radical Realities? What to learn from the Humanisation of Design? How to prepare for Multi-Actor Approaches? How to be qualified in an age of Animated & Automated Creation? – with resp. Merete Ahnfeldt-Mollerup (Royal Danish Academy) Peter Staub (University of Liechtenstein) Maria Rubert de Ventós (ETSAB) and Thomas Bock (TU München). In the evening: Laura Lee (Carnegie Mellon University) and Diane Ghirardo (University of Southern California). 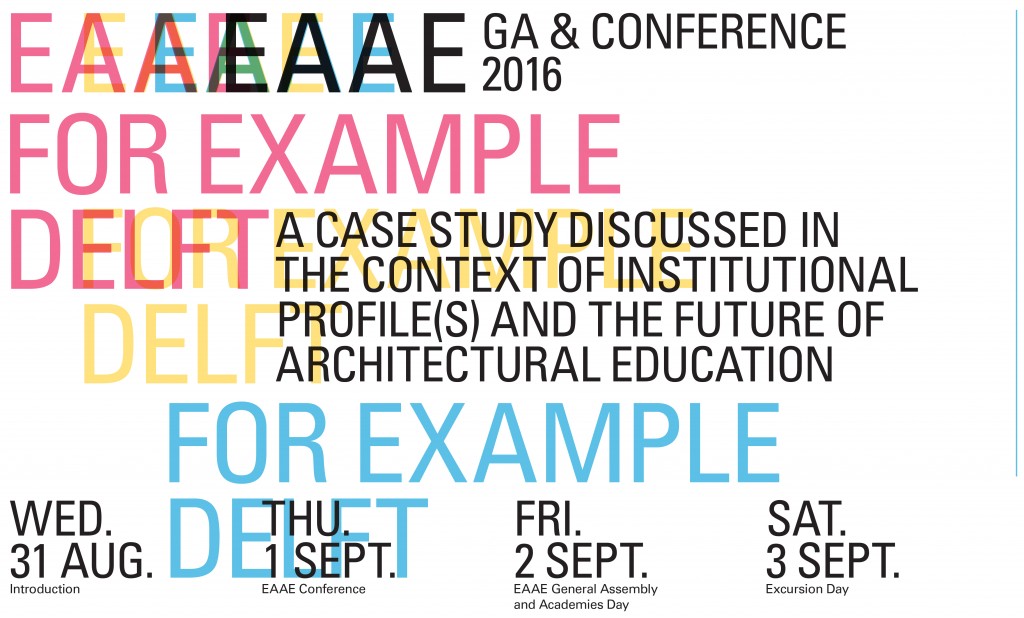 For Example Delft: A Case Study discussed in the Context of Institutional Profile(s) and the Future of Architectural Education.
31st August – 3rd September 2016

END_OF_DOCUMENT_TOKEN_TO_BE_REPLACED

There are some who glorify the state or quality of bigness. This seems to be something characteristic of the modern age – the first hosannas began to resound around the dawn of the metropolis. We see it in the writings of Louis Sullivan and in the statements made by Le Corbusier. They like buildings to be big. Bigness is their quality. The notion of ‘bigness’, as pushed forward more recently by among others Rem Koolhaas, is based on complete disconnection between the interior and the exterior. “Bigness is no longer part of any urban tissue”, he thinks. Context – the relationship with the building’s surroundings – is supposedly irrelevant. Nonsense! His theorem is contradicted by studies of existing cases. When a building exceeds a certain size and becomes a large-scale structure, public interiors are created. The increase in the number of people using both these indoors and the outdoor space links big buildings closely to their surroundings, more then do small-scale buildings, and thus far from being isolated, big buildings become more connected. In their urban environments, the interaction becomes visible and multi-level or privately-owned public space is created within big buildings. New public interiors extend the outdoor network and thereby give the building a fine-meshed structure. In essence, as the interiors become more public, the small scale is introduced into the building. The building may be big purely in terms of size, but in many ways it is quite as diverse as any part of the city.

END_OF_DOCUMENT_TOKEN_TO_BE_REPLACED

In October 2004, the cities of Delft and Antwerp were the scenes of the EAAE conference and the ‘European City’. This conference, organised by the Delft University of Technology and the Antwerp Higher Institute of Architectural Sciences Henry van de Velde, focused on the interaction between ‘architectural interventions’ and ‘urban transformations’, both now and in the past. The typological evolutions of the arcade and the mall exemplify this interaction and as such are put forward in the paper European Publicity, Learning From the Evolution of the Interior Public Space. They both illustrate how interior public spaces came to acquire their dualistic nature: both city and building, both urban and architectural design. By learning from their history, the contemporary design tasks of public interiors can be understood and (re)defined.

At a certain point in the evolution of public interiors, buildings can become part of the city or else parts of the city can become buildings. The result is confusion. Disciplinary borders do change, but the key force behind the current confusion is twofold: urbanism defines new types of public space while architecture defines them as new building types. It is both.

From the perspective of interior public space, the European city need not be content with enclosed autonomous projects, hence an independent architectural approach with its focus on the interior programme, climate and experience only, like in the case of some malls. This forecasts ’empty boxes’, abandoned objects, such as emerging in North America. The position in the city and the urban context are highly relevant, and thus is the urban design task just as crucial. Although designing interiors is traditionally the task of architects, in the case of interior public space it is therefore high time to share that task with urbanists. This is what we can see in the other case of arcades too.

About the European Association for Architectural Education
The European Association for Architectural Education (EAAE) is an international non-profit association committed to the exchange of ideas and people within the field of architectural education and research. The EAAE aims at improving the knowledge base and the quality of architectural and urban design education. It is a bi-lingual English/French association.
Founded in 1975, the EAAE has grown in stature to become an institution fulfilling an increasingly essential role in providing a European perspective for the work of architectural educationalists as well as concerned governmental agencies.
The EAAE counts more than 100 Active Member Schools in Europe from the Canary Islands to the Urals, representing almost 5000 tenured faculty members and more than 100000 students of architecture from the undergraduate to the doctoral level. The association is building up associate membership worldwide.