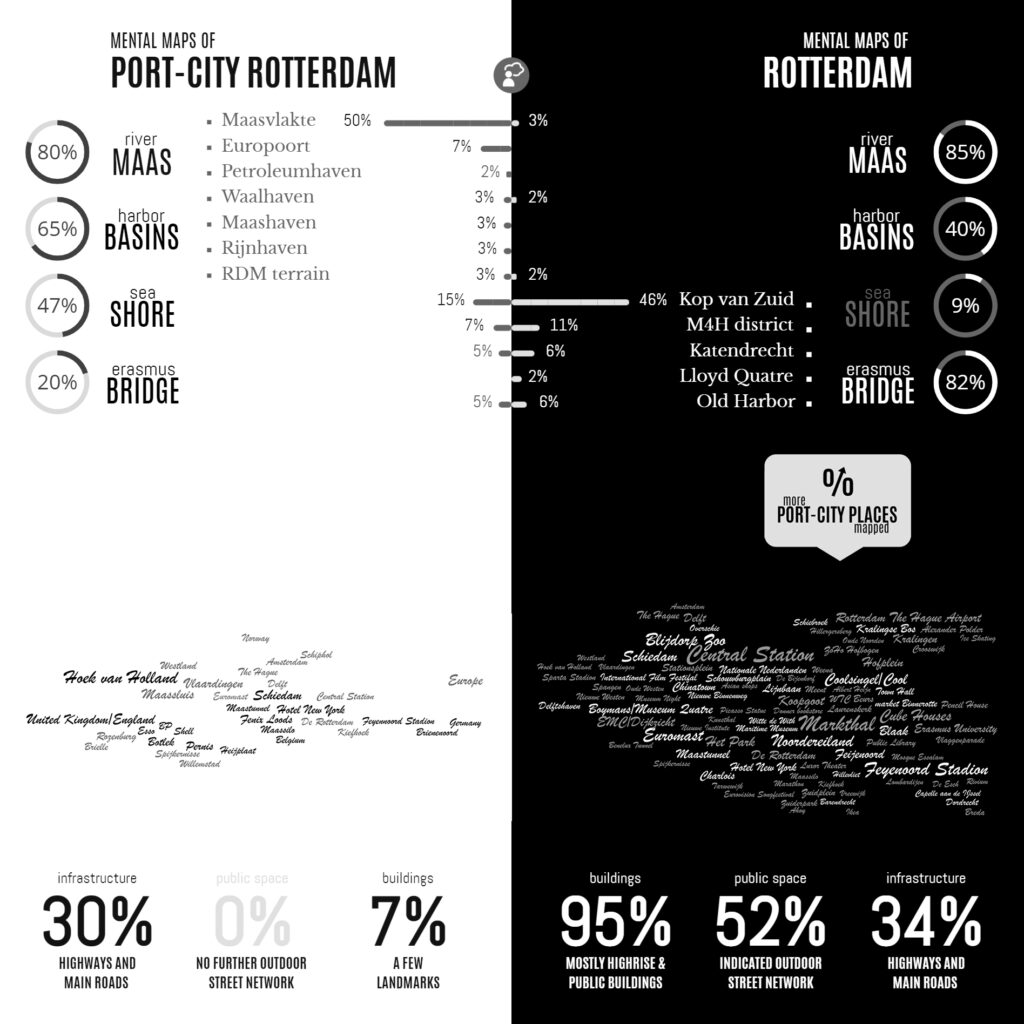 In the Minds of People: The Case of Rotterdam

Following the geographical ‘Any-Port Model’, urban design has stipulated and enforced the disunion of port and city over the recent decades. In conjunction with other disciplines, the emphasis has been laid at the dislocation of production activities in favour of logistic-productive dynamics. At the same time, the professional focus was on the urban areas where most citizens are. While this practice has led to the redevelopment of abandoned harbour areas too, foremost the approach stimulated stronger physical boundaries between lived city and the remaining and new harbour areas. This article describes the application of the dominant model in Rotterdam over the recent decades, on the basis of literature review, and, it confronts this with the concepts of Rotterdam which are in the minds of professionals-in-training, through the method of ‘mental mapping’. On the one hand, mainly harbour areas are memorised when respondents are asked to draw the port-city of Rotterdam, even though its efficient port infrastructure makes public space in these areas rare, and most harbours are located behind inaccessible borders. On the other hand, civic areas, which have a refined network of public spaces and are places for daily life, reveal also all kinds of tangible and intangible signs and symbols related to characteristics of the port-city when memorised; even more. Various elements, linked to water-land or the flows of goods, people, and ideas, dominate the minds of the people when they think of Rotterdam in general. These outcomes reconfirm the unique unity of port and city and provide a way to find an alternative or supplementary model accepting the complex nature of port-cities.

Read:
Harteveld, Maurice (2021) In the Minds of People: Port-City Perspectives, The Case of Rotterdam, In: European Journal of Creative Practices in Cities and Landscapes (CPCL), Vol. 4, No. 2.

Images of Port-City Rotterdam, through the Mental Mapping Methods

This article makes explicit why, at first, we do not usually think beyond water, docks, cargo, moving loads, and ships when we think of port-cities. By reviewing mental maps of port-city Rotterdam drawn by professionals in training, it becomes clear that the adjective ‘port’ modifies the meaning of ‘city’ in such an extent that this echoes in the mind. It does exceptionally when respondents are asked explicitly to draw the ‘port-city’ by mind. Port and city seem to have become conceptual dichotomies. In the case of Rotterdam, the established professional points of views seem to be aligned with this disunion, even though the current trend in practice turns towards a desire to (re)develop the port-city as one. Through similar mental mapping experiments on Rotterdam, yet without adding the label of ‘port-city’ in the question, much richer images of the port-city of Rotterdam are generated. Multi-scalar reviews of such maps help to explicate much more inherited relations between nature and artifice, as well as for example the flows of goods and people. Ultimately, this approach changes the perspectives on the port-city, also for professionals in practice.

Read:
Harteveld, Maurice (2021b) Images of Port-City Rotterdam, through the Mental Mapping Methods. In: Portus, the Online Magazine of RETE (Association for the Collaboration between Ports and Cities), No. 42-2021, Year XXI. RETE Publisher, Venice, ISSN 2282-5789

In this video, you will get an explanation on how mental maps help us to (re)imagine port-cities in two steps: First, by explaining generally why people draw what they draw, and second, by explaining how images of port cities, as displayed in mental maps, are rooted and influenced by cultural frameworks of experience, and how they are biased according to the particular background of the beholder.

This educational video is part of the course Re-Imagining Port Cities: Understanding Space, Society and Culture available for free via online-learning TUDelft , and at the EdX MOOC platform. ©️ TU Delft, released under a CC BY NC SA license.

In this video, you hear more about the concept of a ‘mental map’, the mapping method, or the underlying theory, and why it matters, and how you can use it to educate others.

But before you watch, choose a port-city, and do a small exercise: sketch a map of your port city from memory.

If you have trouble getting started, just imagine you are walking through your port city. What would you see on the way? Are there specific elements or landmarks that stand out? Those are the kind of elements to include in your map. And don’t worry about getting all the details exactly right, it is just a sketch…