The first lucky 7 students have graduated from the MSc MADE (Metropolitan Analysis, Design and Engineering) programme! They received their well-earned MSc diploma during a festive graduation ceremony at AMS Institute. Two years ago, they joined AMS Institute together with elven others for classes on metropolitan challenges, entrepreneurial skills, and data analysis in the urban context. Now they have developed to be the first generation of interdisciplinary metropolitan innovators.

On September 24th, we have celebrated this milestone together with their family and friends when receiving their joint degree diplomas from Delft University of Technology and Wageningen University & Research. This is extra special as these are the first engineering degrees that are handed out in the city of Amsterdam in over 450 years! It has been quite an adventure to write this progrogramme from 2016 until its successful accreditation, and, subsequently, I am happy to have been the first director of this programme. END_OF_DOCUMENT_TOKEN_TO_BE_REPLACED

As the majority of the world population is living in cities today, urban environments have become a place for many people. We are obliged to aim at sustainability and safeguard people’s quality of life, and human wellbeing. These challenges are motivating science and society to approach metropolises differently. Advanced metropolitan solutions to overcome problems are being made possible by today’s revolution of new technologies, theories and methods. But no actor or stakeholder can make metropoles move in one certain direction. Metropolitan solutions require cooperation between knowledge institutes, companies, governments, between cities, citizens and civil society.

The new MSc programme Metropolitan Analysis, Design and Engineering (MADE) integrates analysis, design and engineering in the sphere of the flows in the city; the physical, digital and social environments; and the city and its citizens. As full master programme, the MSc MADE prepares students to be specialised on one hand and an integrator on the other. A MADE graduate will be able to create synergy between specialists from other disciplinary backgrounds. You can make a cross-over too! 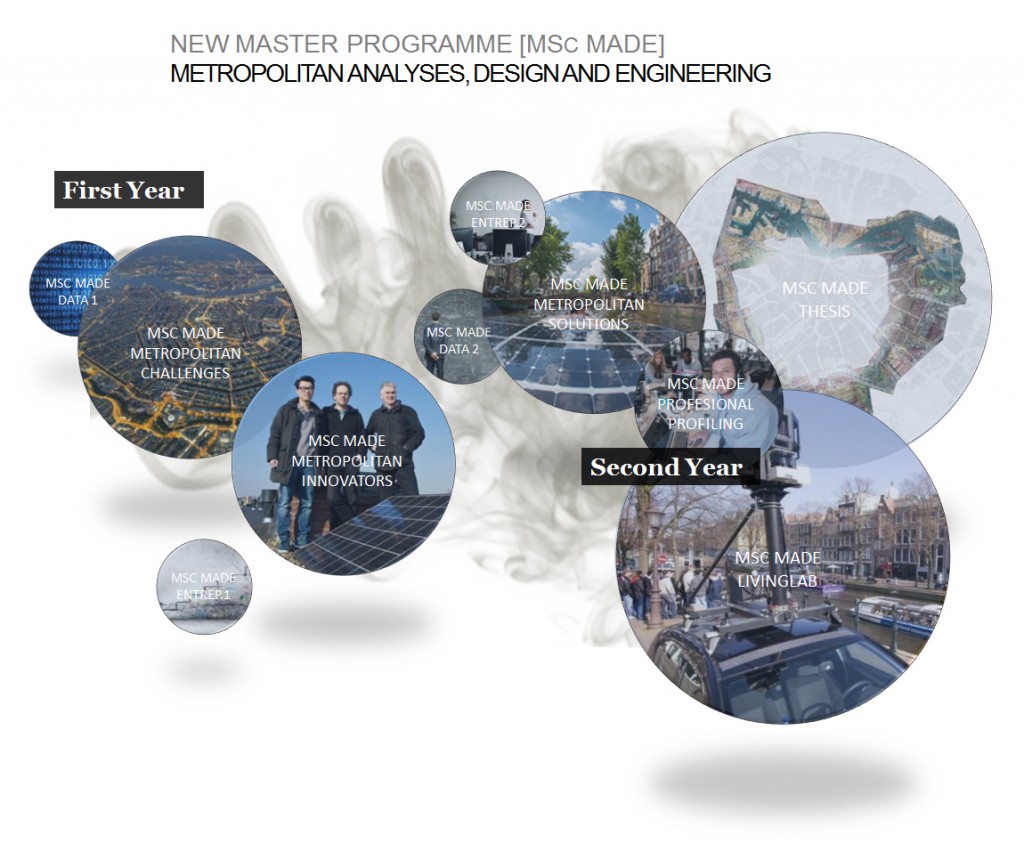 The new trans- and interdisciplinary programme will be offered as a joint degree programme by Delft University of Technology and Wageningen University. It is built on their joint research activities, and consolidated in their participation together with the Massachusetts Institute of Technology (MIT) in the Amsterdam Institute for Advanced Metropolitan Solutions (AMS).
END_OF_DOCUMENT_TOKEN_TO_BE_REPLACED

In a fast urbanising world, cities and metropolitan regions increasingly face challenges of sustainability and quality of life challenges that put at risk issues of mobility and logistics, water and waste management, energy and food security, health and wellbeing. A new two-year master programme Metropolitan Analysis, Design and Engineering (MSc MADE) integrates analysis, design and engineering; the physical, digital and social environments; and the city and its citizens. These challenges are motivating science and society to approach metropoles differently. Advanced metropolitan solutions are being made possible by today’s revolution of new technologies, theories and methods. But no actor or stakeholder can make metropoles move in one certain direction. Metropolitan solutions require cooperation between knowledge institutes, companies, governments, between cities, citizens and civil society.

END_OF_DOCUMENT_TOKEN_TO_BE_REPLACED