When reasoning our material world emerged in cities, ‘matter’ was first to question. This is obviously what we see and what we can handle. This shapes our urban environment. Yet, in an arcadian search for beginning, origin, or first cause the lens was put on finding primordial substance; ‘arché’ (oersubstantie, urstoff, …). This informed the search to actuating principles (as a cause) in Aristotle. The subsequent cosmic search towards the genesis and structure of our world introduced the concept of a material substratum, an interval considered to be invisible and unshaped: ‘khôra’, chora, or space. The territory of the Ancient Greek polis outside the city proper. In Politeía, Plato relates it to the just city and just (hu)man. In these pioneering thoughts, public space is found. Continuously echoing today in understanding chora as a place of being a being or mediating between sensible and intelligible, it also introduced change… Public space isn’t static. People move, societies transform, humans age, generations follow…. This effects our thinking on public space. 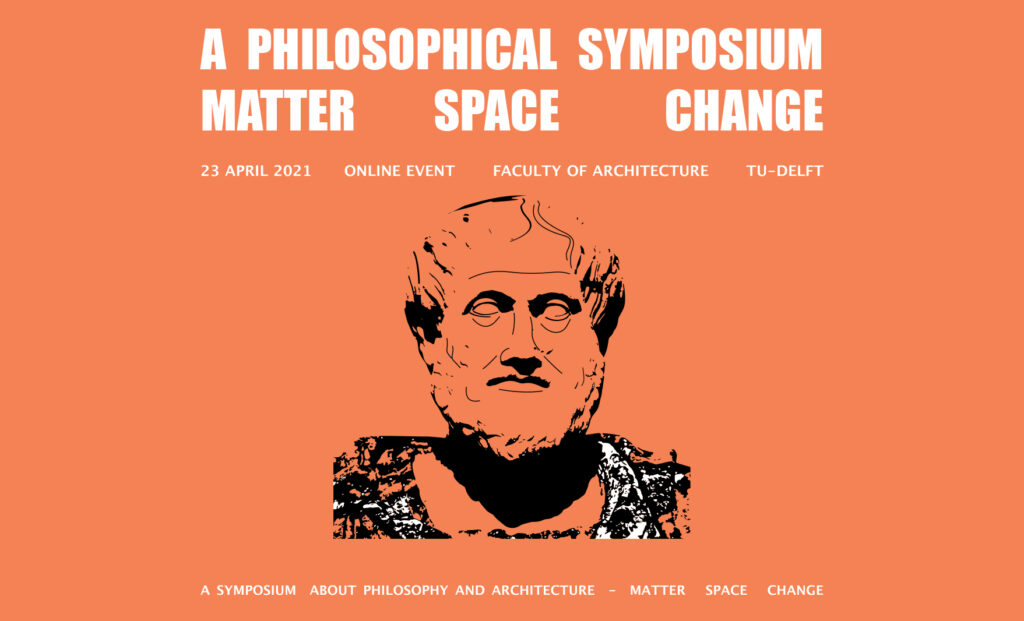 Who owns the public space?

So, if we consider matter, space, and change, as basic concepts of architecture and urban design, the question arises ‘What do designers need to know about these concepts?’ Could or would knowledge about these concepts result in a better design of our environment, in a more meaningful design that relates to the needs of humans to be at home, a design that is in harmony with the nature of the planet on which we walk? With this in mind, it becomes worthwhile for architects to investigate what philosophy has revealed about the concepts of matter, space, and change. Could the vision of philosophers be of benefit to the architectural design process? Simultaneously, the question arises whether philosophers are being challenged by the thoughts of designers about matter, space, and change?

Generally, every history of Western European philosophy starts at around 600 BC with the Presocratics philosophers. They investigated the nature of our environment, asking if it is possible to distinguish an order, a unifying principle in the natural world, and if it is possible to determine a primordial substance; ‘arché’  (oersubstantie, urstoff, ) of which the whole universe is created?  Presocratic philosophers are characterized by a great diversity of thinking: they did not agree about the answer to what such a unifying material could be. Water, fire, and air are considered and discussed by Thales of Miletus, Heraclitus and Anaximenus. Anaximander introduced the concept of ‘apeiron’. Apeiron is ungenerated and everlasting, limitless, timeless. It is the introduction of an abstract principle. After Parmenides had pushed monism to the extreme, a new generation of philosophers abandoned monism for pluralism: Empedocles posited four elements – earth, water, air, and fire –, Anaxagoras an infinite variety of ‘seeds’, and the atomists Leucippus and Democritus an infinite number of atoms roaming about through infinite space. Atomist physics was later developed by Epicurus, whose materialist philosophy continued to challenge the views of Plato and Aristotle.

The philosophical thinking of the Presocratics was continued by the three brilliant and famous philosophers Socrates, Plato and Aristotle. Recently, Hilde Heynen gives an account of the development of the concept of space starting with the ideas of Plato, which are described in his book Timaeus written around 360 BC. In Timaeus the genesis and the structure of the cosmic world are described. Plato distinguishes three cosmic phenomena that define the cosmic world in which we live. First of all, there is the intangible realm, only accessible with our thinking, the permanent transcendent world of being that never changes. Secondly, there is the tangible temporary world of becoming, which is always changing, the touchable material world. And the third phenome is called chora of which Plato mentions that it is very hard, nearly impossible, to describe what it really is. He uses the concept of receptacle as a definition for chora. So, for the moment we can say that chora is the receptacle of all becoming.

Aristotle is known for his wide range of interests. His writings are focused on biology, logic, metaphysics, politics, and ethics. His thoughts about the natural world are described in his book Physics which is an account of the principles of nature illuminated with concepts of change, infinity, place, void, time, and continuity. These concepts are very closely related to our existence, whether on a physical level or a mental level. The book starts with a wonderfully clear statement: In any subject which has principles, causes, and elements, scientific knowledge and understanding stem from a grasp of these, for we think we know a thing only when we have grasped its first causes and principles and have traced it back to its elements. David Bostock writes in his Essays on Aristotle’s Physics that if you continue reading the book you will find out that Aristotle is more interested in the principles of natural and man-made processes or changes. One could conclude that the real understanding of the natural and man-made world comes from understanding the principles of change.

With morning lectures, which offer a concise introduction on the early antique philosophical understanding of matter, space, and change with a focus on the thinking of Plato and Aristotle embedded in the context of the Pre-Socratics philosophers. Speakers are Guy Claessens, researcher at the KU Leuven, and Frans de Haas, researcher at the University of Leiden. And afternoon sessions to explore the question related to the morning lectures. Maurice Harteveld will question: Who owns public space? It is specially organised for students. Under the guidance of Delft academics and philosophers, small groups of students will talk and discuss.

The symposium is organised by Alexander de Ridder, section Heritage & Architecture of the Faculty of Architecture and the Built Environment